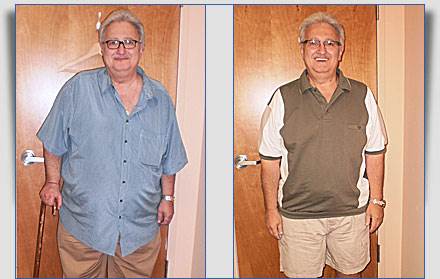 Richard came to see us in May of 2012 when he was referred by his primary care doctor for weight management. At that point he suffered from excruciating knee and back pain (having undergone 12 back surgeries) and was walking with a cane. He could hardly move around without being in a lot of pain. He was started on a partial Optifast diet which he followed very well.

Now, exactly three months later, Richard has lost more than a 100 pounds!! He walks a mile almost every day (without a cane) and is still watching his caloric intake. Best of all he feels great!

*The success stories depicted in this section are representative of these individuals only. Individual results may vary.